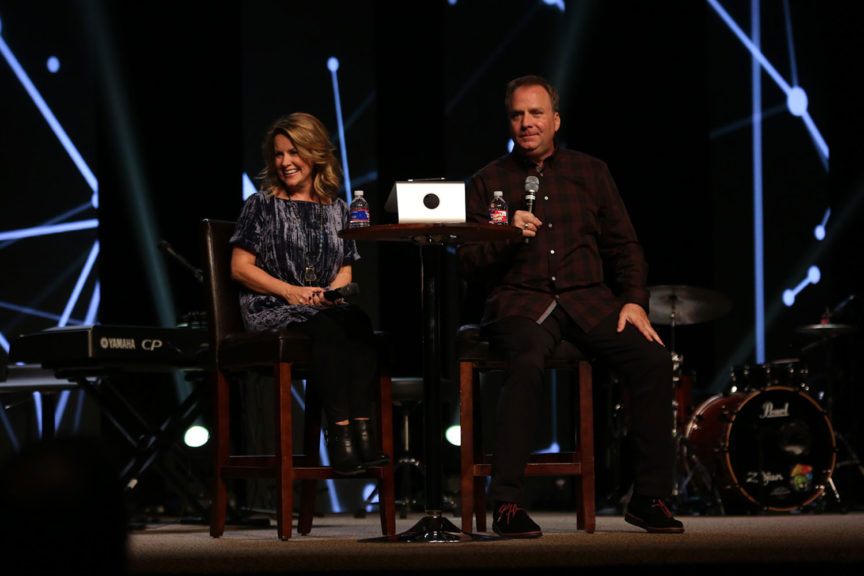 Two courageous people sat on the stage looking at an audience of several hundred pastors and leaders from around the world. Scott and Melanie Jones had one purpose in that moment. They were determined to rip the veil off of one of the most closely held secrets of leadership. Spiritual and moral leaders have problems too.

We know about those leaders who have blown up their lives with poor choices. The faces of those who were saying one thing while doing another have been plastered all over television, their stories being heard from every news outlet. The secular world loves to glory in one more failure in what they believe to be the self professed “morally superior Christian world”.

As they took their place on the stage their one purpose was to reveal their pain and allow their history to change someone else’s future.

What you rarely hear are the stories of those who have made it. These are leaders who have failed in some way, but didn’t quit. There are many who have fallen down, but got up again. Great leaders have made mistakes, but refused to allow their mistakes to define their lives. This story has played out many thousands of times over the course of human history, but usually those who survive aren’t willing to share the story. They believe that guarding that secret is the key to holding onto credibility as a leader. This is where Scott and Melanie Jones are different. As they took their place on the stage their one purpose was to reveal their pain and allow their history to change someone else’s future.

I learned four lessons as I listened to their story of victory.

Scott and Melanie are some of the nicest people I know. In the spirit of full disclosure, they are also my pastors, but my statement remains true. They have lead Grace Church in Humble TX for many years. Their faithfulness and strength as leaders is one of the reasons Grace has grown from a church of several hundred to a multi-campus church of many thousands. They are great people, but they made mistakes.

Don’t allow your life to be derailed by the mistakes you will make. Recognize that mistakes will happen. You will make wrong choices. You may even do something completely stupid…and yet your life is not over. Neither your life nor your ministry is dependent on your perfection.

God knew you and He still chose you for His purpose. His grace fills the gap between your imperfection and His perfection. If you have done something stupid, you have discovered one thing — you are human. Now your job is simple. Repent, get up, and walk on.

The wounds endured by this couple were deep. They cut to the heart of who they are and what they believe. Those listening to them as they sat together on that stage did not see a representation of those wounds, but we saw an example of healing.

It wasn’t just in what they said, but through what they did. It was revealed in the way they honored each other even as they spoke about the hurt they endured. It was the quick touch of a hand as they spoke about the anger they felt or humiliation they experienced. The touch said, “I’m saying this, but it’s ok now.” The looks at one another said, “We hurt, but we survived.” The respect in their voice said, “I thought I loved you then, but I know I love you now.” In that moment we witnessed the power of time to heal wounds.

Your wound will heal if you can give it the time. Don’t act like you are not hurt. Stop lying to yourself and others. The wound is real, but it will heal. God designed us that way. Take the time to heal because your story is not over.

Neither Scott nor Melanie solely blamed the other for their situation. As each of them spoke about their struggle the other would jump in saying something like, “That is true, but what I got wrong in this was…” Each of them owned their mistakes. That was courage on display.

You can’t fix what you won’t address. Always pushing responsibility will only leave open issues without resolution. Owning the mistake demands the courage to make necessary changes to avoid the same mistake in the future. Next Level Leaders summon the courage to own their mistakes and move forward with their lives and their callings.

As Scott and Melanie shared the story of how they got into their mess people in the crowd began nodding their heads. They nodded because they recognized some of the landmarks the Jones’ were referring to. They realized they were walking down that same path. Maybe they had not gone that far, but they could see that possibility from where they stood.

By revealing their path both into and out of tragedy Scott and Melanie carved out a trail in the undergrowth of life in which some people were stuck.  Someone was buried in a patch of improper relationship and didn’t know the way out until Melanie showed up with a bulldozer and made the way clear. Someone else was making circles in unforgiveness until Scott arrived with a map and said, “This is the way to go.”

Your story could be someone’s salvation, but an unknown story will save no one. If God has called you to be a leader it will require you to reveal yourself. You can only lead where you are willing to go and you can’t go in secret. The leader who will not reveal themselves to those who are following is not leading at all.

Use wisdom, but don’t hide. Revealing yourself allows you to lead others.

You can hear Scott and Melanie’s story of overcoming by following this link. As they shared their story I thought, “This is Next Level Leadership.” I encourage every leader to take advantage of hearing how God turned tragedy into victory. It might be time for your leadership to go to the next level too.